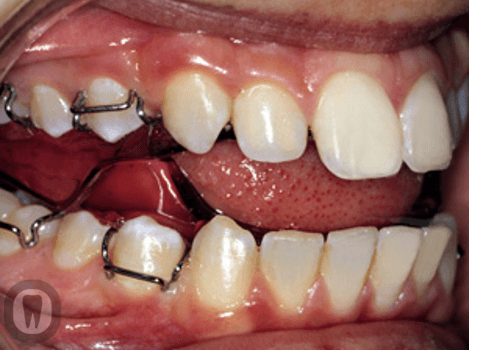 A functional appliance is a type of brace used to correct protrusive top teeth. They have separate upper and lower parts, which interlock placing the lower jaw in a more advanced position.

Correction of protrusive teeth is not straightforward and relies on co-operation from you or your child. Simply placing train track braces is usually insufficient as they are designed primarily to straighten teeth. Consequently, to address both protrusive and crooked teeth may require the use of both a functional appliance, followed by fixed braces, or the use of functional and fixed braces together.

Much debate and controversy has surrounded the mode of action of functional braces. It appears that functional braces primarily tip teeth, moving top teeth backwards and lower teeth forwards. Reliable research suggests that the position and length of the lower jaw is governed by genetics. Therefore, while growth of the lower jaw may be altered in the short-term by a functional brace, it appears that in the long-term no significant difference in jaw position is likely to occur. Nevertheless, by virtue of moving the teeth, changes in lip position may occur with the upper lip covering the top teeth more fully.

Functional appliances are believed to be most successful prior to or during the adolescent growth spurt. This typically occurs between the ages of 11 and 14 in boys and 10 to 13 in girls. Nevertheless, treatment may be suggested at an earlier or later stage in certain circumstances.